Thank you in advance for writing something especially for me! I've tried to keep things as open as possible while still giving you prompts that might lead to chewy goodness, but if you have an idea for a fic that you've been burning to write, please ignore all my suggestions and write that instead. As long as you avoid my don'ts, I prefer to get a fic that someone enjoyed writing to something where they had to backbend to please some random suggestion of mine.

I love all of these fandoms (I've written at least one fic in each of them), so a fic in any one of them would make me extremely happy!

I'm kitsunealyc on AO3, so feel free to look at what I've got there if you need more data on what I like. And above all: have fun!

Like many folks, I'm moving out. You can find me on my website/blog.

Or, for fannish and fic things, at my Dreamwidth journal.

Thank you in advance for writing something especially for me! I've tried to keep things as open as possible while still giving you prompts that might lead to chewy goodness, but if you have an idea for a fic that you've been burning to write, please ignore all my suggestions and write that instead. As long as you avoid my don'ts, I prefer to get a fic that someone enjoyed writing to something where they had to backbend to please some random suggestion of mine.

I'm sad that the camera doesn't pick up all the gradients of blue and purple. In real life, it looks like octopus tentacles sprouted from my head. Also, my timing is totally off. It'll be faded by the Nebulas, and I'll need to redo for Wiscon. 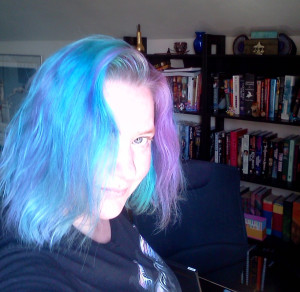 Last night I dreamed I was a space rock star. I had a sleek, silver space shuttle and a lovable group of misfits that I collected to make up my band. There was an androgynous J-Pop star, a German Death-Metal lady (they had a romance sub-plot), an android made of glowing blue nanobots who was trying to understand the connection between math, music, and love (guess who I had a romance sub-plot with), an adorable Latina urchin girl who was an undocumented immigrant - lots of hijinks around sneaking her aboard my shuttle, because once she was on the shuttle, it was considered inter-galactic space-space, and she couldn't be deported. Rounding out the group was my shady agent/manager, who knew how to get awesome stuff done on the cheap. He was either Kenyan or Nigerian. That confusion was a plot point for some reason, but I can't recall what the reason was.

We flew around a lot in my spiffy shuttle, though I was not a very good pilot. We caused a lot of chaos that seemed to be a problem at first, but it ended up improving people's days -- like when I crash-flew my shuttle through the space-port, which caused it to close down and give everyone a much-needed day off.

I don't recall that my space rock band ever got around to playing any music. And I have no clue why my brain decided to dream in the genre of Saturday Morning Cartoon.

I spent a chunk of last night and all my morning lie-in-bed time trying to compose my recommendation for Netflix's Orange is the New Black. I finally gave up because the more enthusiastic I am about something, the more I lose any ability for persuasive language and just want to pound my 'this is fucking awesome' into other people's skulls.

Language. What's up with that? Where's my telepathic rail gun?

So I just want to say... Orange is the New Black. Fucking amazing. Ignore the horrible trailers. They are horrible. The actual show is brilliant in so many ways that it renders me as incoherent as if I was trying to describe all the elephant parts at once. It tackles race, class, gender, and queer issues. It explores over a dozen complicated character arcs and interweaves them brilliantly.

At its core, it breaks down the false categories of criminal and not-criminal in a way that effectively critiques our entire notion of criminality (in kind of a Black Helicopters way that doesn't flinch from looking at how terrible and inevitable and yet internally-logical the process of criminalization is. Blythe could totally write for this show). At one point late in the season, one of the (newer) guards tells an inmate that the only difference between them is that the inmate got caught. Nobody in the show is entirely horrible, and nobody in the show is entirely noble. the show manages to lay bare the flaws in our current system of incarceration in a way that doesn't come across as just liberal hand-wringing.

But most importantly, the show manages to do something I don't think I've ever seen a major media product pull off (or even attempt), and I think a large part of the success of the characters and the critique comes down to this: it uses a female gaze.

Only one of the actresses fits the Hollywood standard (the main character, which is a deliberate choice that I'll get to in a moment). The rest are all shapes, all sizes, all ages. And because of the way they are stripped down and put in the same khaki-and-grey shapeless clothes, the audience is forced to look at them as subjects rather than objects. We follow these characters through (pretty complex) arcs, and by just a few episodes in, every one of them is sexy as fuck because we're invited to encounter them as compelling, fully-rounded subjects rather than as objects that fail to meet the standards of the male gaze.

Watching this show was like my first time at WisCon.

The only hard point I had in watching this show was the main character. For several episodes, I felt like they failed with her, that she was the result of some studio exec's opinion that we needed a pretty, blonde white woman to serve as our entry into the world of the show.

I was wrong. Stick with her. Her character arc is such a surprise, and so worth it by the time you get to the end of the first season.

So... yeah. That's my spoiler-free, probably completely unpersuasive pitch for why everyone needs to watch this show, and why it should win all the Emmys ever handed out, and why it can teach us all a lot about writing complex, compelling characters.